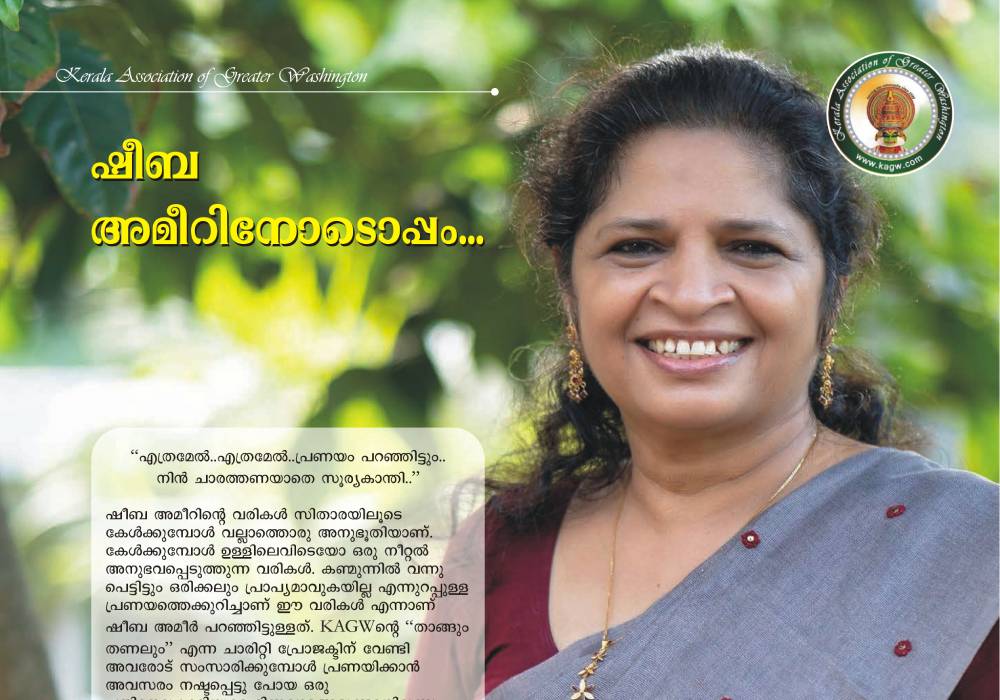 Today, the Kerala Association of Greater Washington (KAGW) published its 2022 Annual Magazine titled “Punarjjani,” indicating a new life and a reset after the pandemic. The centerpiece of this year’s magazine is an interview with Mrs. Sheeba Ameer (Founder & Secretary, Solace) conducted by Mr. Jobin Kuruvilla. This interview was conducted when Sheeba Chechi visited us in Washington, D.C. in April 2022. Through this interview, Jobin tries to bring out different facets of Sheeba Chechi – the mother, the tireless social worker, the advocate for those without voices, and ultimately the person herself. An extract of the interview is given below. Please read for yourself….

The love and affection that was accorded to me from Washington DC were indeed immeasurable. I am sure this interview is a positive symbol of that. More importantly in this interview, I was able to be very candid and expressive more than usual and credit to Jobin for making it happen with his pertinent questions that really touched my heart and also the very cordial approach.  My heartfelt gratitude and appreciation to Jobin and especially to the Kerala Association of Greater Washington. Their splendid initiative to include this interview in their magazine is especially praiseworthy and I believe the mileage it had provided to Solace is exceptional. The magazine had already reached all  KAGW member households and several of them had forwarded to me photographs of that on their table tops.  I take this opportunity to express my sincere thankfulness and admiration to Washington DC – KAGW for their magnanimous support and I will be soon posting in detail about everything that we had received from there.